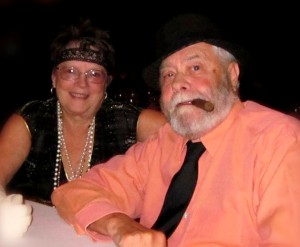 He was born July 13, 1940, in Schenectady, NY. Carl majored in Physics and Mathematics at Hartwick College in Oneonta, NY. It was there that he met the love of his life, Sigrid Joan Westcott (who we now know as Sigie Stewart) and they were married in 1963 in Rochester, NY.

Carl graduated with a Ph.D. in Medicine from the University of Rochester, School of Medicine in 1966. They moved to Philadelphia where he became a postdoctoral student under Dr. Peter Nowell (who was famous for discovering the Philadelphia chromosome). In 1970, he was asked to join the Radiation Oncology group at Washington University, School of Medicine at Barnes Hospital in St. Louis, MO. In 1980, he was invited to go to Los Alamos for a sabbatical. After a year there, he was asked to stay and become the group leader of Experimental Pathology.

Sigie, who had a Bachelor’s degree in chemistry and mathematics, joined him full-time in the lab and they worked very well together. He was also appointed to Adjuvant Professor of Pathology and Adjuvant Professor of Cell Biology at the University of New Mexico School of Medicine. In 1988, he accepted a position at Roswell Park Center Institute in Buffalo, NY. He became Director of the clinical and research Laboratory of Flow Cytometry for the entire institute. Sigie was offered a Supervisory Lab tech position there, also. He and Sigie both became very well known in the flow cytometry scientific arena and they traveled all over the world to give lectures and teach courses in the clinical use of flow cytometry and the diagnosis of human hematopoietic malignancies. Here they finished their careers writing, teaching, and traveling all over the world.

They both retired from Roswell on their 40th wedding anniversary, June 22, 2003, and in 2005 moved to Jemez Springs. There they built their house in the Jemez Mountains to enjoy the backwoods quality of life. For the past 10 years, Carl and Sigie spent hours building their model train layout in the bottom floor of their home.

He is survived by his wife, Sigie; daughter, Cindy Woodring, and her husband, Mitch; and sons, Tyler, Duncan, and Gregory, his wife Barbra and children, Kayle, Connor and Keith.